Going further on this week topic on trends on sustainability for a smart living, after talking about smart cities and electric car trends, I think is fair that we put the needle on it, see how reality bites, how cities cope with it and how every little counts on the long term approach on CO2 reduction.

I need to speak about Paris as a reference of what can be a step by step success on mobility. We can all refer to nordic cities as a reference on eco-mobility ideas, but the size of their cities, population and the natural-born organisation makes it much more easier to implement. In my opinion, the challenge is always a huge thee million people much more “chaotic” and “latin” city (Paris centre is 3 million, almost 11 million overall). We are not going to talk about initiatives like cutting street traffic for Paris Plâge that might sound excentric though popular, further achievements on real traffic, like cutting lanes for jogging on sundays i.e.

As a frequent traveller to Paris (on leisure or work) I can’t help for admiration on the way the Major of Paris Bertrand Delanoë is doing to promote alternative ways of mobility to the car. With a real traffic congestion problem, In 2010 I saw the velib (similar to the bicing we have in Barcelona), in 2012 has gone one step ahead any other city with the succesful similar system with electrical cars, the autolib. With a regular fee, one can take one car on a charging station and leaving it on another. And it works !! first it was 66 cars, now is 1.800 !!! (Maybe we need to make a post on how parisians love their city and enjoy every brand new thing, in the end the population support on initiatives is a key contributor to their succes). (further information in this article)

On one of the most interesting eco-motion webs, bluemove it is mentioned that in Paris the last years 40% population has abandoned the cars for public transportation. The success of this is not only one of the best Undergrounds of Europe (I can only think of Madrid for competitor in Europe). Also in this article (only avalaible in spanish) Paris government is about to reduce or remove all grants for diesel, more CO2 guilty than gasoline, and also ban cars older than 17 years.

These are only a couple of examples on how you can win a war by winning small battles. Innovating always is the key, who thought about a car sharing with electrical cars in a big city was feasible ?.

In my opinion, the problem of Paris traffic congestion is the radiality of the infrastructures that obly you to cross the “Périphérique” when you come down from Normandie to Borgogne. But this needs much more money investment in long term. Anyway, We deeply encourage from this blog all these initiatives and will continue monitoring Paris evolution with satisfaction. 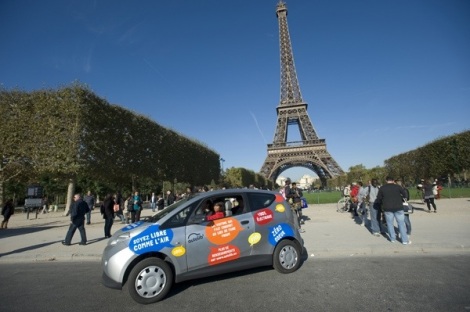